Is the Tunnel Good for our Neighbourhood Protest Action

Fantastic turn out to the Is the Tunnel Good for our Neighbourhood Protest Action with over 100 people braving the early morning cold and helping to make this community’s voice heard!

The protest featured Snuff Puppet Ring Master, the fantastic ‘Deliver us From Diesel’ community band and a range of speakers including:

MTAG President Samantha McArthur who said:  “If we don’t get 24/7 truck bans to force trucks to use it we’re going to be in the exact same situation we’re in now, or worse as the freight burden on the port increases and we get more trucks. Luke Donnellan has stood on Francis St here, he’s stood on Australia’s most polluted residential street.  He has seen the problem.  The Andrew’s government came to power saying this community would have a solution by 2018.  We are now being asked to play a wait and see game, where we wait to see if a 5.5 billion dollars infrastructure project fixes this problem. We’ve seen City Link.  City Link was sold as the be all and end all, silver bullet solution to getting trucks off our streets.  Has that happened? No! Well we won’t wait and see, we won’t accept it and we won’t pay in the meantime with this community’s health.  Enough is Enough.”

Oncology Pharmacist and Clean Air Advocate Clare Walter talked about the health impacts of diesel exhaust  “It’s man made particulate matter from burning carbon, such as vehicle emissions which has the potential to do the most harm to us.  Their particulates are much smaller and they also travel further, they last for weeks, up to a month in the atmosphere, and when we breathe them in they travel further down to the bottom of our lungs.  They then can get into our blood stream where they travel along and hit our organs.  They have a range of effects from heart attacks, strokes, lung cancer, respiratory illness and stunting lung development in children.”

Clare talked about how this community had already been exposed to higher health risks than other parts of Melbourne, but that if this tunnel is successful in getting trucks off your streets then that would be a win for us.  However she also talked about the importance of filtration because the particulates have to go somewhere and will eventually touch town at ground level where they will be breathed in. “The tunnel creates a very large point source of pollution into the general air shed.  It also creates an opportunity to effectively remove that pollution. The Calle 30 tunnel in Madrid and the Cesena tunnel in Italy both have filters that were installed with the express purpose to remove this particulate matter before it’s added to the general air shed. The reason those filters were put there is to protect the health of their surrounding communities.”

“My understanding the government is not keen to follow suit due to the cost and a previously unsuccessful attempt in a Sydney tunnel.  However the Sydney data wasn’t particularly useful.  It was a retrofit, an unusual design and they didn’t go with the technology being used in Cesena and Madrid. In terms of cost, I can’t comment on that, but what I will say is this:  If those filters are installed, there will be significant associated health benefits.  Diesel emissions cause lung cancer, heart attacks, strokes, respiratory illnesses and levels below our regulated thresholds, and there is no level beyond which these health impacts do not occur.  Our legislated thresholds are not a safe guard for our health.  Any reduction in particulate matter, no matter what the level, will result in improve health outcomes for your community and any community under the affected general air shed.  The technology exists to reduce the tunnel emissions into the air shed. Yarraville and the surrounding areas as had to put up with worse air quality compared to the rest of Melbourne for too long. I think it’s reasonable that you ask that the government go a step further than just getting trucks off your streets and also adopt world’s best practice in tunnel design helping to redress the inequitable air pollution exposure that you guys have had to put up with for too long.”

Maribyrnong Councillor Grant Miles who said “I find it quite unbelievable that there’s going to be 5.5 billion dollars spent on a road and here we are standing in the middle of an intersection wondering if that’s going to fix the problem that MTAG and the community have been calling for so long to fix. My biggest concern is that Buckley St, Footscray, Buckley St Seddon, will become a seething mass of non stop freight.  Maribyrnong Council have voted to support this project with very strict conditions that there are curfews put on all of our major roads through the city of Maribyrnong including Buckley st and Moore St. We’ve heard this all before, City Link was going to fix this problem 15 years ago and here we are, still waiting for it to be fixed.  It’s time to fix it Premier Daniel Andrews.” _O6Y8529
Councillors, calling for social justice for their community. 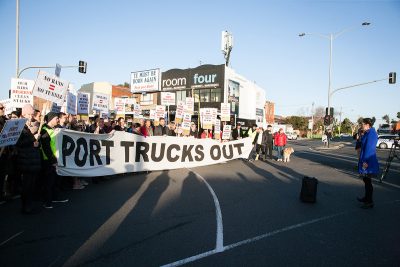 The protest had excellent media coverage.  See a compilation of stories from the evening news on channels 2, 7, 9 and 10 here.

The story was also covered by ABC News Online, The Star Weekly and the Maribyrnong Leader.

The day before Roads Minister Luke Donnellan responded to a question about the upcoming protest with “It’s fine to do kumbaya with the Greens, but what we’re doing is, we’re working with industry and the local community. It’s fine for others, if they’re a bit frustrated, they want everything done immediately – well, it doesn’t work that way.”

Luke, we have waited 15 years now for a solution and we should not have to wait another 6 years before a commitment is made to truck bans.  We are not even asking for these bans UNTIL 2022!  That’s not exactly asking that everything be done immediately. We have highly legitimate concerns – the highest rate of hospital admissions for asthma and respiratory illness in children in Victoria.  We have the highest levels of No2 in Victoria, a particularly deadly component of diesel exhaust.  Our safety and amenity are highly compromised every single day.  We know you have seen this with your own eyes.  MTAG will work with politicians from all parties to get port trucks off our residential streets. MTAG have so far been highly engaged in discussions on the Western Distributor with government and Transurban.  But we need a guarantee that this will be a solution, not another broken promise. We need to know now that truck bans will be implemented once the Western Distributor is built and we need a commitment to world’s best practice tunnel filtering technology.  This community has lived with uncertainty and a constant rotation of broken infrastructure promises for too long.  We need some certainty that this project will fix our health and pollution problems because if a 5.5 billion dollar project won’t do that then what will?

MTAG PROTEST ACTION – Is the Tunnel good for our Neighbourhood?
Super sized trucks headed for Yarraville